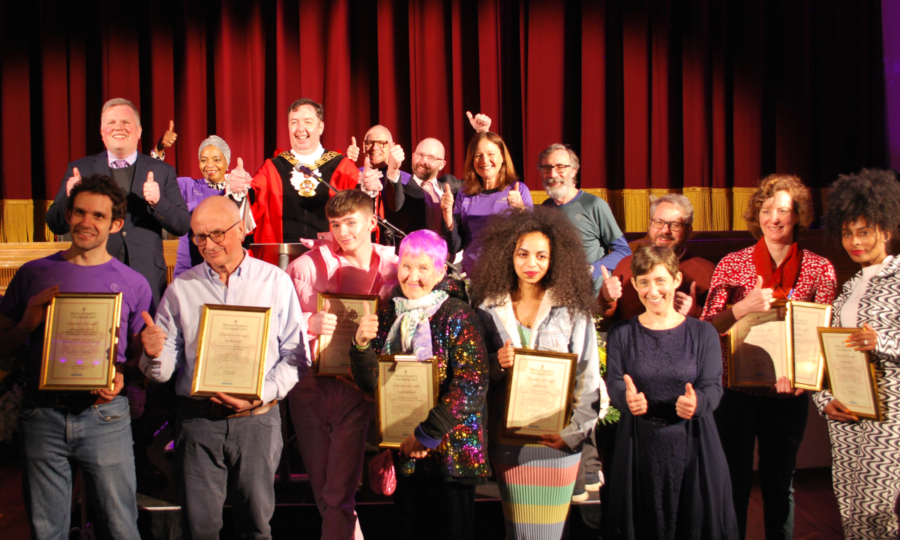 Every year, the Mayor of Islington commends the contribution of the borough’s local heroes with the Mayor’s Civic Awards and the Ben Kinsella Award.

The Mayor’s Civic Awards are given to local people whose excellence in volunteering or caring for others around them makes them worthy of some extra recognition. The Ben Kinsella Award is for exceptional young people, in memory of Ben Kinsella who tragically lost his life in 2008. Each of the winners is nominated by someone else in the community, who wishes to show gratitude for their accomplishments.

A special ceremony was held at Islington Assembly Hall this week to celebrate this year’s winners. The awards were presented to:

Tyler Clancy, winner of the Ben Kinsella Award
An incredibly resilient and driven young person, who has experienced grief after losing a friend, supported his peers and organised LGBTQ+ events as part of his involvement with local youth services.

Hanna Araya and Danayt Leul, Civic Award winners
Two young people who arrived in the UK as unaccompanied asylum seekers, speaking no English and knowing no one here. They spend their time feeding the homeless and giving out hot drinks on Old Street.

Lawrence Curtis, Civic Award winner
Lawrence set up Healthy Minds, Healthy Bods, turning his experience of unemployment and depression into a project that has brought healthy habits, exercise positivity, dance and joy to many, especially in the Highbury area.

Islington Parkrun volunteers, Civic Award winners
A group that facilitates the biggest weekly social event for all ages in Islington, the Highbury Fields Parkrun. The volunteers get up early every Saturday and Sunday, week in, week out, to provide a free timed run for Islington residents.

Beatrix Payne, Mads Iversen and Ian McVeigh, Civic Award winners
The trio set up the Friends of Canonbury Square group a few years ago. They have since worked hard to keep the community gardening project meeting at least once a month, bringing together the residents of the square as well as those who live nearby and don’t have access to private gardens.

Lunita Williams, Civic Award winner
The dynamic leader of a diverse group of volunteers who have transformed an overgrown and neglected area of Highbury Fields, making an outstanding contribution to the well-being of the local community. She has also volunteered at Canonbury Primary School for more than 20 years!