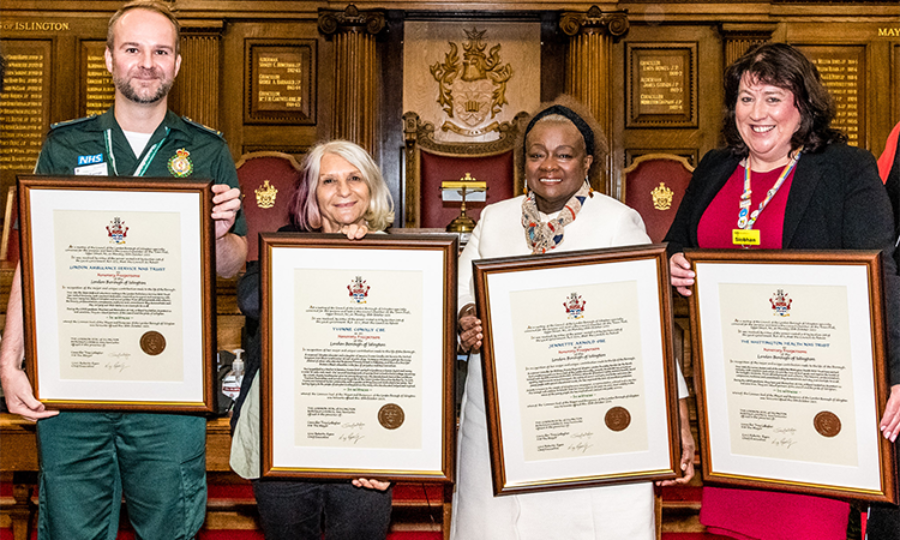 The practice of awarding the ‘freedom’ of a city or a borough can be traced back as far as the Middle Ages, when respected citizens were granted special privileges relating to trade and property ownership. In modern society the award is ceremonial, but it is reserved for people and organisations who are exceptional in their service to the public.

Two Black local leaders were awarded Freedom of the Borough this week, in recognition of their major contributions to life in Islington: Yvonne Conolly and Jennette Arnold.

Yvonne Conolly CBE was honoured posthumously after sadly passing away earlier this year. She arrived from Jamaica in 1963 with £36 in her pocket. In the face of prejudice and discrimination, she worked her way into the top job at Ring Cross Primary School in Holloway, becoming Britain’s first Black female headteacher. She taught and inspired both pupils and fellow educators over the course of her career and was described as a friend to all who knew her.

Jennette Arnold OBE is a former London Assembly member and Islington councillor. She came to Islington as a child of the Windrush generation, before moving to Birmingham and qualifying as a state registered nurse. She later moved back to Islington to work for the Royal College of Nursing and went on to make a name for herself in politics. A tireless campaigner for quality public services, workers’ rights, women’s safety and racial equality, her accomplishments have improved the lives of many people in Islington and beyond.

As we’re celebrating Black History Month at the moment, it seems appropriate to reflect on the lives of these two inspirational Black leaders. They both used their careers to make a difference to life in the borough – both in education and politics – and touched many lives in the process.

Whittington Health and London Ambulance Service were also given the honour, as a show of gratitude for the bravery and selflessness of NHS health workers during the Covid-19 pandemic. The last two years have made it clear just how vital our health workers are to life in Islington. They have cared for us and kept us safe, working tirelessly under enormous pressure.

People and organisations, like these four, who do so much for public life often don’t get the recognition they deserve, so it’s fantastic to see them being celebrated and appreciated in Islington.