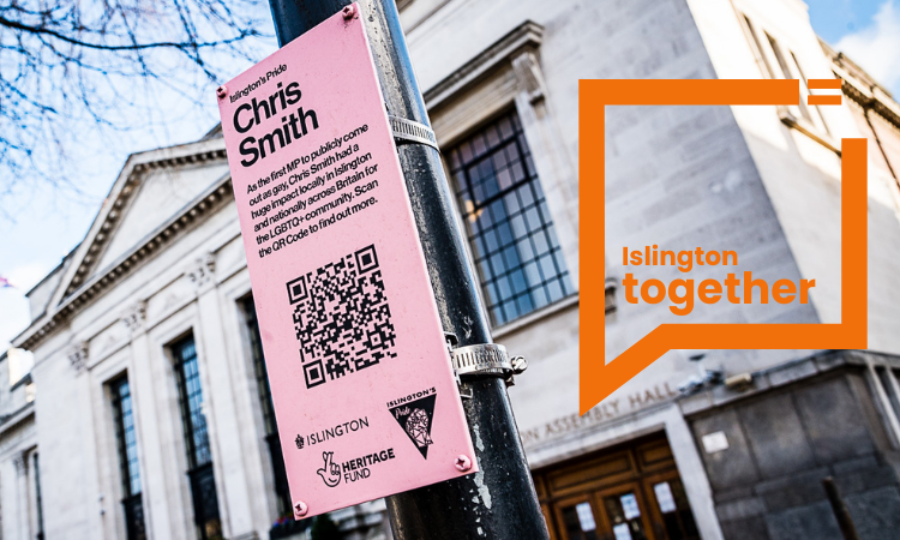 February is LGBTQ History Month and this year, we want to spotlight the pink plaques you may have spotted around the borough. Designed and installed by local heritage organisation Islington’s Pride, the plaques feature a QR code which can be scanned to find out more about a particular person or point of interest at that location, in celebration of Islington’s LGBTQ history. To give you a flavour of what to expect, throughout the month we’ll be telling the stories of the people behind the plaques in a series of articles. First up: Chris Smith MP

Chris Smith, Baron Smith of Finsbury, made history as the UK’s first MP to publicly come out as gay.  His famous quote comes from a rally in Rugby in November 1984; “Good afternoon, I’m Chris Smith. I’m the Labour MP for Islington South and Finsbury and I’m gay.”

He was an Islington councillor between 1978 and 1983, and MP for Islington South and Finsbury between 1983 and 2005, during which time he was also shadow secretary of state for heritage. Chris served as secretary of state for culture, media and sport from 1997 to 2001 under Tony Blair’s government, and was popular among his constituents for always being available to listen to people talk about issues.

While Chris felt that being gay had no impact on his work as a politician, he regularly spoke out on issues affecting the LGBTQ community, such as the AIDS crisis, Section 28, and the forced outing of closeted public figures. He was the only openly gay member of parliament during the introduction of Section 28, a law prohibiting “the promotion of homosexuality” by local authorities.

During the protests surrounding Section 28, he often joined the demonstrators. On one occasion, he met the man who would become his partner of 25 years, which he acknowledges as an unexpected benefit.

In 2005, Chris Smith was the first MP to acknowledge that he was HIV positive. He was motivated to disclose his status following the announcement by Nelson Mandela that his son had died of the disease. Shortly after his disclosure, Chris was contacted by Nelson Mandela, who expressed his gratitude.