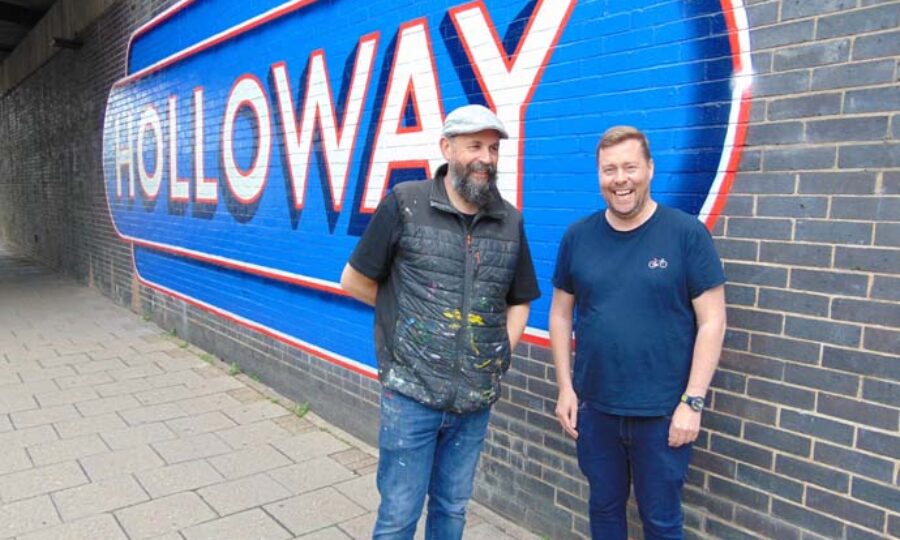 If you’ve been to Holloway Road station recently, you might’ve noticed the bright blue mural, sprucing up this otherwise ordinary corner of Islington. The new ‘Holloway’ sign is the work of Lionel Stanhope, whose striking street art can be found across London. We sat down with Lionel and Paul Wise, one of the key people behind the new mural art, to find out how they worked together to turn their vision into a reality

Paul, who had recently moved to the area, began the project with the aim to brighten up the area. He started a fundraising effort and managed to secure backing from Islington Council and Nag’s Head Town Centre Management Group to improve the area by commissioning the mural. Paul had seen similar artwork in south London and was familiar with artist Lionel Stanhope.

“Through social media I saw there was an appetite for it, but given the amount of paperwork that’s involved, I imagine a lot of people would give up. It is a long process. I tried to plan as well as I could, but obstacles do crop up and think that is where people fall down. You have to persevere through it.”

Fortunately, Paul wasn’t alone in his determination. “I think you also need allies. Everything has its challenges so ultimately, you need support,” he continues. “Staff at the council were extremely helpful, which motivated me and made me feel that it was possible. I asked local businesses for help, too. Some helped financially but where they couldn’t do that, they provided contacts or helped simply by willing me on. Elizabeth House and Nag’s Head were both really helpful.”

The idea is for the mural to act as a catalyst for more improvements to the area. “People taking pride in Holloway would be brilliant. I hope to see other knock-on, positive effects.”

Lionel Stanhope, from east London, had already painted more than 50 signs in the same style across London when Paul got in touch. Yet getting the project completed was not easy. “It always takes one or two people in the community to be really focused and to push it along, because you do come up against a lot of hurdles and red tape all the way through,” he explains, “There were risk assessments to do, there was insurance – there are so many different aspects to it. But Paul pushed through it and carried on. He was determined to do it and pulled it off. It’s nice when people in the community have enough passion to get something done in their area and see it through to the end.”

Throughout the project, people’s pride in their local community shone through. “Most people have pride in where they live, especially if they’ve lived there a long time. It’s easy for them to make a connection to that piece of work, and I think that’s what appeals to people. Also, I think it spans the generations quite well because it’s got the traditional quite retro styling of the old rail signs, but it’s also got brighter colours which appeal to younger people who appreciate something a bit funkier,” he observes.

“People walk by grubby walls with nothing on them all day long. It’s an easy thing to change and can have a real positive impact on the community.”