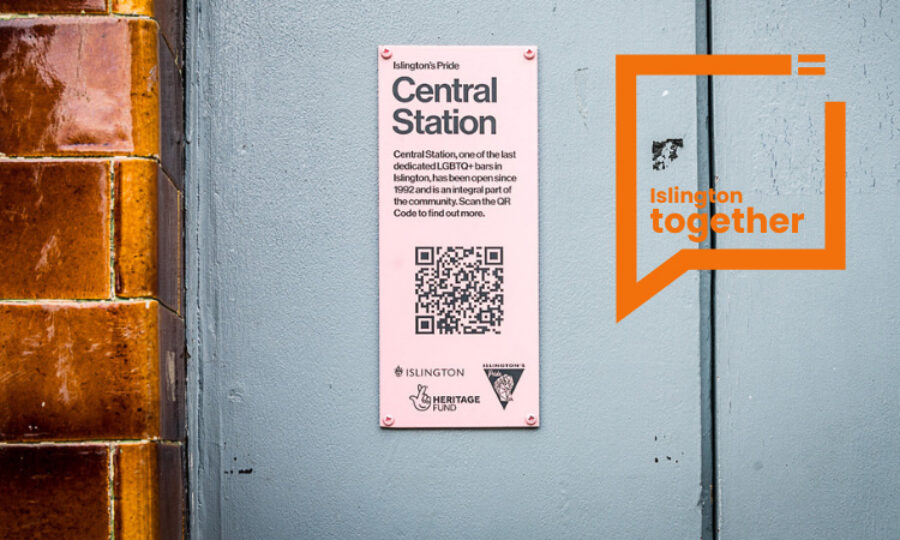 February is LGBTQ History Month and this year, we’ve been spotlighting the pink plaques you may have spotted around the borough. Designed and installed by local heritage organisation Islington’s Pride, the plaques feature a QR code which can be scanned to find out more about a particular person or point of interest at that location, in celebration of Islington’s LGBTQ history. The next blog in our series is dedicated to a local legend: Central Station

Central Station has been open since 1992 and is Islington’s oldest still operational LGBTQ bar. Central Station has been used as a meeting place for LGBTQ social groups and sports clubs since its foundation. Its location near King’s Cross makes it accessible for people both in and outside of London, and therefore a key part of the LGBTQ club and social scene.

Just some of the groups who have made Central Station their home include SM Dykes, Lesbian and Gay Christian Movement, Gay Skinhead Group, the London Blues Group for uniforms/denim/cowboy gear wearers, and the Gay Bridge Club. Other groups include Step Out, a gay and lesbian youth group providing support and social events for under 25s, and Rank Outsiders, a campaign group for LGBTQ people in the armed forces.

In the 1990s and 2000s, Central Station also hosted the Gay Football Supporters’ Network, a social group for LGBTQ football fans founded in 1989, which campaigned to tackle homophobia, biphobia, and transphobia in football and the community. The bar has been an important place for LGBTQ sports fans who may have felt like outsiders within team sports. The Kings Cross Steelers, the world’s first gay rugby club, was first thought up by four friends having a drink at the bar.

As it did for many venues, the pandemic caused unprecedented challenges for the bar, with a crowdfunding appeal launched in 2021. The venue remains open and still operates as a pub and bar, serving food and drink during the day with cabaret, drag, and karaoke events in the evening. Central Station is an integral part of Islington’s LGBTQ community, and hopefully will continue to be for many years to come!