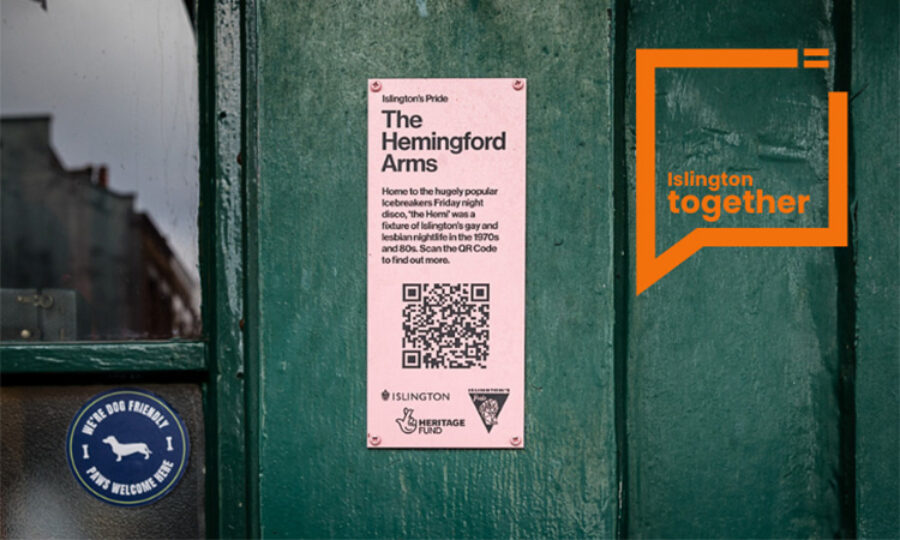 February is LGBTQ History Month and this year, we’ve been spotlighting the pink plaques you may have spotted around the borough. Designed and installed by local heritage organisation Islington’s Pride, the plaques feature a QR code which can be scanned to find out more about a particular person or point of interest at that location, in celebration of Islington’s LGBTQ history. On the last day of LGBTQ History Month, we’re dedicating the final blog in our series to the Hemingford Arms

The Hemingford Arms is the oldest traditional pub in Barnsbury. It opened in 1855 and remains open today. In the 1970s and 80s, when a side street in Islington was just another obscure part of inner-city London, the ‘Hemi’ was a rare space where a variety of characters would gather.

Lisa Power once described the Hemingford Arms as “a melting pot of everything disreputable. All the subterranean and anti-establishment groupings you could imagine – gays, lesbians drag queens, punks, new-romantics, hard-line politicos, anarchists – you name them and they would congregate at the Hemi, especially for the Friday night discos.”

In the 1980s, its first floor was home to the Icebreakers Friday -night disco, a hugely popular event which operated in tandem with the community services provided by Icebreakers. The disco was held here between approximately 1981 and 1983 before moving to the Carved Red Lion. Islington and Haringey Gay Group also made the pub their home in the early 1980s, before moving to the Fallen Angel in 1989.