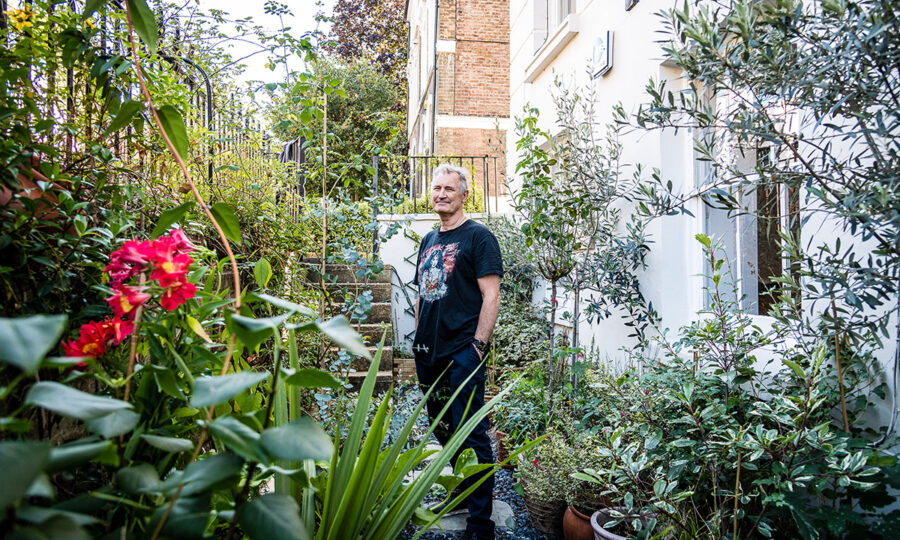 Islington in Bloom is an annual horticultural competition run by Islington Gardeners and Islington Council. Resident Garry McQuinn was one of this year’s winners, clinching first place for the Best Front Garden award. He talks to Islington Life about creating terracotta pot collages, community spirit and how gardening has helped him through dark days

How did you get into gardening?
I’ve never really seen myself as a gardener. I’ve been based in the city my entire life. We live in a top-floor flat and I have a 10-year-old daughter. But two or three years ago, we had some window boxes and my daughter, wife and I turned them into a little family project. It extended from there.

The front garden wasn’t a garden, it was a concrete patch. I’d always thought it would be nice to do something with it, so when lockdown happened I started to go down there every day for an hour or two. It became my lockdown project.

Did you teach yourself?
Pretty much. I bought some books and for Christmas, my wife got me a subscription to Gardeners’ World. I read that religiously, look at what’s in season and what’s not in season. So I’m much better educated than I was.

I’m not sure I have a talent for it, but I’m persistent. There’s no garden design or plan behind it. I will go to a garden centre or even Budgens on the high street to see what they’ve got. I often pick up their £3 daisies. It’s very ad hoc. I like getting down there, getting my hands dirty and making it up as I go along.

What do you enjoy most about gardening?
If you asked my wife, she would probably tell you gardening became therapy for me during lockdown. I’m a theatre producer by trade and my business has been particularly damaged by the pandemic. I put shows on all around the world – I was travelling constantly and that suddenly came to a screeching halt. Wondering if my business was going to survive was a challenge. Getting down into that garden, especially on a lovely, sunny day, and just pottering around was a very healing thing for me. It became something I could focus on – building and growing something. It’s helped me a lot through a professionally very difficult 18 months.

The impact of gardening on my relationship with my family has been wonderful. We’ve now been together all the time for 18 months and for us that has worked out really well – and gardening was a big part of that. It’s a shared activity, everybody gets involved. I also do a lot of work on my back garden now. It’s a communal garden, which is shared by the four flats in our building. It used to be a bit of a rubbish heap, but now everybody in the block goes down and has picnics. There’s a real liveliness there now. When it’s a nice day, you can look out of the window and see the kids from downstairs playing out there. I’m heartened by that.

I have to say, it’s also fantastic how gardening has improved and enhanced our community relationships. I see people walking past and they stop for a chat. Our circle of acquaintances and friends has grown significantly, just through being in the front garden. There’s also more interaction between the people in this block now than there ever was before. Someone who moved in recently even said that she moved in because of the garden – she said it was such an inner-city oasis that she immediately wanted to live here. 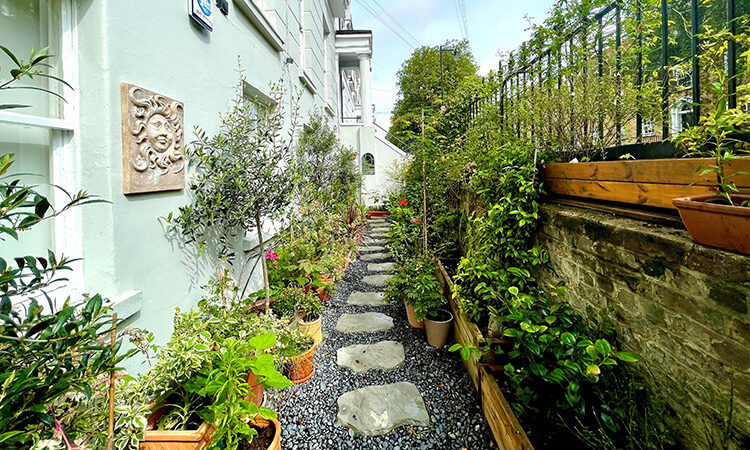 What is it about gardening that helps improve your mental wellbeing, do you think?
It has really helped with discipline. Having spent so many hours setting up the garden, I feel like I need to look after it. I’ve even lost some weight, at a time when it’s easy to put weight on because of the pandemic. It’s largely, I suspect, because of that more healthful way of being. I now find myself wanting to go out into the garden – and even beyond that because if you’re out there, you might as well go for a walk! We have the river nearby, which is gorgeous. The natural extension of me going into the garden is wandering down and doing the river walk – and that, too, now is a highlight of my day. It’s certainly had a very beneficial effect on my overall health – not just my mental health, but physically, too.

What made you decide to enter Islington in Bloom?
I first heard about Islington in Bloom a few years ago, through an announcement by Islington Council. I applied with my daughter for Best Window Box. When it came around again, she said I should apply for Best Front Garden. It was pretty straightforward to enter – I just picked a couple of pictures I already had that seemed to represent the garden and sent them off.

How would you describe your front garden?
The front garden is concrete, so digging down into the ground isn’t really an option. I had in my head this image of a collage of terracotta pots – I really like that look. It’s as much about the pots themselves as it is about the greenery. Each pot is different – the only thing they have in common is that they are terracotta. I like the randomness of it.

I chose small, smooth river pebbles to sit underneath the pots in dark grey, to contrast with the terracotta. In terms of plants, I chose a combination of greenery and things that flower. Now that I know when things are in season, there’s a bit of curating of that too.

What would you say to someone who might be considering taking up gardening but is unsure where to start?
If you’re vaguely thinking about getting into gardening and you’re not sure if you’re any good at it, the way I was, then I would say ‘go for it’, because plants want to grow – they just do and sometimes you can’t stop them! It’s also inspiring to see something flower, sometimes overnight. I would recommend it highly. There’s also a constant cycle of renewal going on.

To find out more about the competition and for the full list of winners, visit the Islington in Bloom website. Want to try your hand at gardening but don’t have your own outside space? There are plenty of local community gardening projects to get involved with, such as Octopus Community Plant Nursery, which won first place for Best Edible Garden in this year’s awards. You can also get your hands dirty volunteering at one of Islington’s parks. Visit Friends of Parks to find out more.