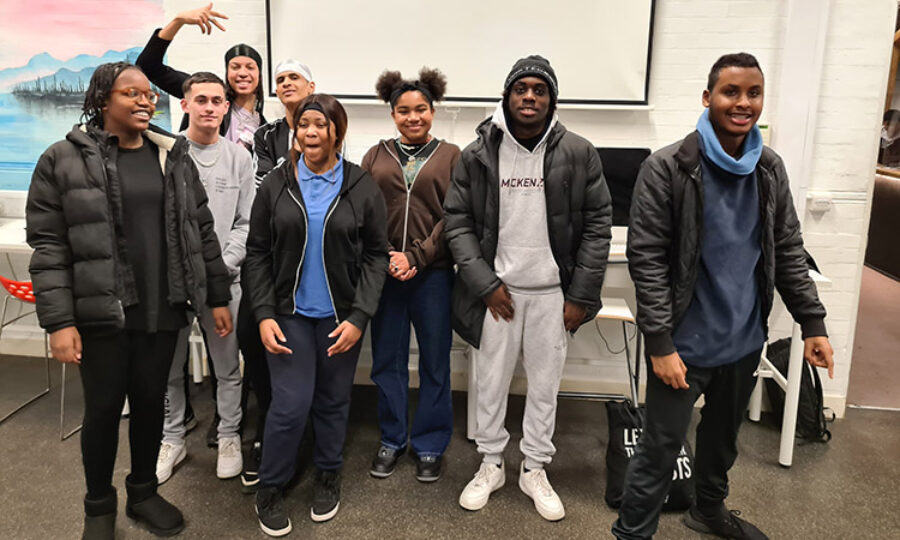 Young people in Islington discuss all things culture: from heritage and tradition, to hustling

Created by students from Lift Youth Hub, in conjunction with the council’s three enrichment programmes, 100 Hours World of Work, 11 by 11 and Music Education Islington, the Young Minds podcast series explores the experiences of young people in Islington.

Planned, developed and run by young people, each episode has a different theme: in episode one, the group discussed culture. This blog is a summary of the conversation.

Listen to the full podcast

How do you think your life differs from your parents’ when they were young?
PJ: I feel like my life differs a lot. My mum grew up in Jamaica, which is very different from London. She didn’t have as much freedom as me – it was really dangerous in May Pen.

Miriam: I was born in Nigeria, same as my mum, so my life has been similar. I think the biggest difference is social media and how it came basically right before I was born. When my mum was growing up, she didn’t have any of that.

Jacob: Another big difference is opportunity. My dad was born in Nigeria and there’s not much choice of industry you can get into there. Whereas in London, there’s so much freedom and choice.

Miriam: Because I was raised in both countries, Nigeria and London, I know how it is on both sides. When my mum was growing up it was very unsafe and as Jacob said, there wasn’t as many opportunities. But in London especially, there’s so many things that I could do. I’m very grateful for where I am right now.

Should tradition be thrown away in modern times or honoured?
Miriam: I think tradition should be kept but altered to fit the times. Some traditions, like forced marriage, we’ve learnt that it’s immoral. But other traditions like Christmas, which brings people joy, I feel like we should keep that, because why not?

Hussein: Coming from a Somali background, traditionally my parents don’t really celebrate Christmas but I feel like because I was born here in the UK, it should be a tradition for us. But you can’t see Christmas as a non-religious holiday; some see it as just a fun holiday.

Jacob: A lot of traditions can be very harmful. There are good ones, but I think it’s important that as society we reassess values and choose which we should keep and which need to be left in the past.

PJ: Traditions should be kept. Different countries, different places, different people have different traditions and it makes us unique. The traditions that we keep more or less define who we are. It’s good to have that sense of self.

Uhba: I do believe that tradition makes us who we are. Throughout history, when people have fallen into times of chaos and disaster, they cling back to their own ways. So in my opinion it’s essential.

Have you been given the opportunity to show off your background?
Hussein: When I was at primary school, we had this thing called International Day and basically, they had all these types of countries and my mum brought in all these types of rice and food. Everyone was so happy. It just felt nice.

Miriam: Every school should do that. Some people may feel like they’re forgetting their country but may not feel like they talk about it enough. If my school did that, I know we would have had fun. People would have learned about other backgrounds and not been so closed minded.

Jacob: I’ve become very proud of my country. It’s not that rejected it before, but it was something that I would question: “Oh should I not wear this in case someone might make a joke”. But now, I’ve got to a point where I’m proud of where I’m from and anyone who tries to say anything about that is just being ignorant. Those international days at schools are very important, as they reduce that residual tension. If you see someone on the street wearing a hijab, for example, you won’t be like “what’s that? That’s something weird”. You understand it’s a part of their faith. It’s part of their religion and it’s part of who they are. So it’s also a respect thing.

Do you think the impact of hustle culture – being solely focused on money – has damaged young minds?
PJ: The idea of hustle culture is extremely damaging. It’s making people feel like they need to be extremely rich. There’s no need to be rich to be content in life, as long as you’re making enough money to support yourself, pay your bills, buy little things in life that are going to make you happy.

Miriam: I’ve seen on TikTok a lot of things about trading and stocks, or how to get a job at 15. I do want a job, but it’s not essential for me at this age. I don’t really have anything to pay for.

Hussein: Money is not always important, but it does help in some ways. You’ve got to work hard and just try your best.

Jacob: Some people may say money is the root of all evil, but it’s a thin line because some people do get motivated to get out and do their job by money. But I’ve seen some of friends fall into not so good activities, just for the sake of having money to buy nice clothes.

Ubha: I think hustle culture has damaged a lot of young minds, but the main problem is instant gratification. Obviously, instant gratification feels much better and it comes quicker, but that usually comes with a price – laziness and contempt. They become obsessed with trying to find the easiest way to get something done, which isn’t always the best decision.

How do you feel the people around you, including on social media, affect you?
Miriam: This is my favourite question, because even if people say “social media doesn’t affect you”, it really does. It’s everywhere and we’re the first generation to actually grow up with it. Simple things like going on Instagram, you see a t-shirt you like and now you want it. It’s not a bad thing, but it still impacts the way we think and what we want to do.

Jacob: This is also about popularity. A lot of people on social media will just do these random, sometimes even bad, things just for some likes, some followers. I just feel like a lot of that comes from insecurity and social media is the biggest factor in that.

PJ: I think it has affected me in a positive way. Social media has a lot of content and there’s a lot of things that I wouldn’t have known about. I’m a very creative person so being able to see other people’s art inspires me a lot. I feel like altogether, it’s a good thing.

Ubha: I think social media is a lot like money, it amplifies who you are and what you can learn and also freedom, just like money can do if used properly. Social media itself isn’t necessarily bad, it’s just how people choose to use it.

Miriam: Even without social media, we would be influenced by other people if we walked down the street. It impacts us a lot but even if we didn’t have it, we would still be looking for others’ approval.

Jacob: I think it’s also important to recognise the benefits of it. A lot of young people are given opportunities because of social media. They can promote their songs, their pieces of art, their literature. Also you can make a lot of friends that you might even have a stronger bond with than the friends you see in real life.

How can we make the world a more accepting place for people from different cultures?
Ubha: It’s perfectly fine to try to teach others about different cultures, but at the same time we shouldn’t force them to learn. We should give them the option. For example, for Black History Month, people are taken out of lessons and into assembly to learn about it. But I feel like you should give them the chance to come and listen and if not, they can stay in the class. When we force people to try and learn about something they’re not necessarily interested in yet, they will develop a lot of bias.

Miriam: I somewhat agree with you, but that can lead to a lot of ignorance and stupidity from people. For example, in my school, we never really focused on Black History Month until I was in year 10 so a lot of the younger years, they were saying the ‘n word’, they were calling people different slurs and saying, “oh I didn’t know what it meant”. If they were just educated on it, they would know better. Also, certain things you kind of have to learn. If a teacher came up to me and said, “in your break time, you can come and learn about this” – I’d rather go and eat pizza with my friends. If we’re given a time of day where we’re not missing anything important and we can actually learn about something, I feel like that would be way better.

Jacob: Sometimes being forced towards subjects like this is necessary, because it really has a lot of people’s lives depending on it. People have been killed because of their race, their religion or whatever and I feel like if we teach children about this from young, when they grow old, they won’t have this stigma around it.

Hussein: We should not force anyone to forget their culture and their history. We should be patient with it. For example, there are so many facts about Islam and so many people get things wrong about it. If people took the time and patience, maybe we could all learn about each type of culture and religion.

Miriam: Right now, there’s a lot of progressive changes in the world – all the protests that are happening and social media is exposing more people to different cultures and ideas. If we continue going in the direction, in 20 years’ time, the world will be way better.