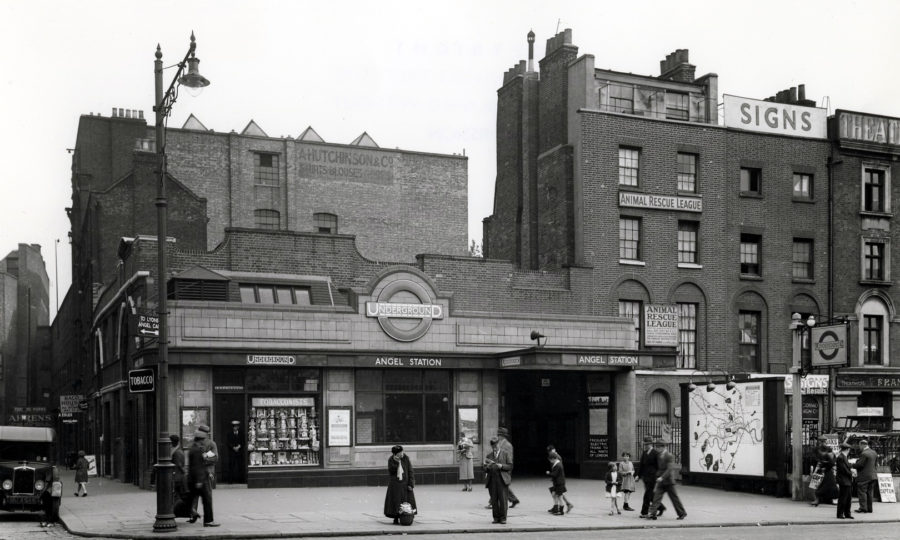 Angel Islington is perhaps the most recognised location in the borough. Giving its name to the area and falling within the parish St James Clerkenwell (later Finsbury), the Angel was an 18th-century coaching inn, with medieval origins, and was the nearest staging post to London. Until the New Road from Paddington to Islington was completed in 1757 (and City Road in 1761), traffic entered the City via Goswell Road and Smithfield Market via St John Street. Near the inn were ‘lairs’ for livestock bound for Smithfield. The Angel Inn and nearby Old Red Lion public house in St John Street both claim that Thomas Paine (1737-1809) wrote his influential publication ‘Rights of Man’ (1791) at their venue.

The Angel Inn was completely rebuilt in 1819 and again in 1899 as a Lyons’ Corner House, with its distinctive great dome and brown brickwork. It later became home to the Co-operative Bank. Another famous coaching inn adjacent to the Angel was the Peacock on Islington High Street.

There are several notable buildings and structures connected with the history of the area. These include the Grand Theatre (1860-1962), the Angel Picture Theatre (1913-1972) with its distinct tower, Angel Underground Station (1901, rebuilt 1992) and the famous Angel clock (1906) designed and built by John Smith and Sons of Clerkenwell and located where Goswell Road meets City Road. Angel and Pentonville Road are also featured as locations in Monopoly!

Pentonville was one of London’s earliest planned suburbs, first laid out in 1773 on the estate of Henry Penton, MP for Winchester. It is situated between Angel to the east and Barnsbury to the north. The ground adjoining the New Road (renamed Pentonville Road in 1857) was separated from London by open land of the New River Company. Penton’s estate originally consisted of 66 acres but plans allowed for 134 acres to be laid out for housing and other developments on a grid system.

The first street completed was Penton Street in 1773, which led to the fashionable White Conduit House, a place of entertainment. For the next 50 years the streets around Pentonville were developed and, by 1851, the area consisted of 1,503 houses and 9,522 inhabitants. Opposite today’s Claremont Square reservoir (1855), earlier named the Upper Pond, was Busby’s Folly, another pleasure ground; its site is now occupied by the Lexington pub and music venue. Chapel Street (now Chapel Market) was developed around 1790. Today’s well-known street market officially dates to 1879, and was so called as it led to St James Church on Pentonville Road. Buried in its grounds is Joseph ‘Joey’ Grimaldi (1779-1837), the world’s most famous clown, who died in nearby Calshot Street.