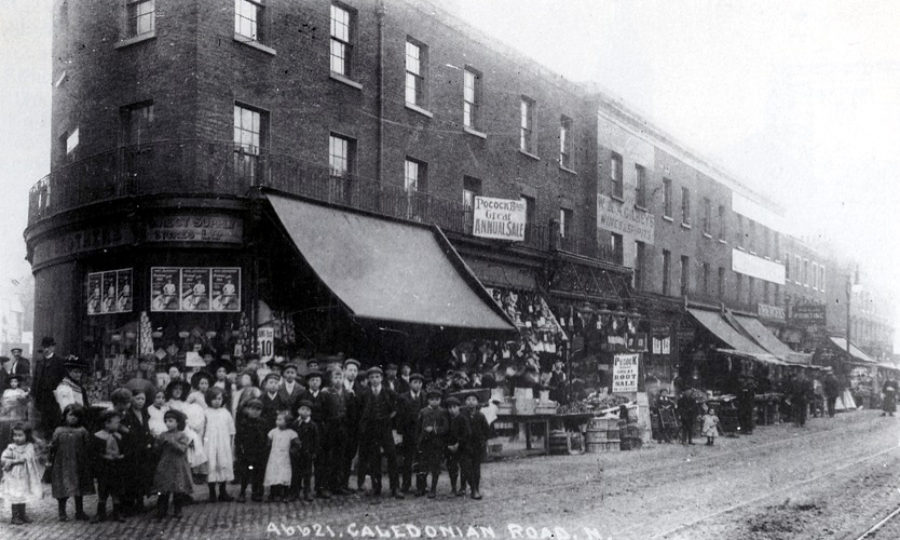 Standing on the high ridge of Islington hill, Barnsbury stretches from Upper Street in the east, north towards Holloway Road, westwards to York Way and Caledonian Road and south to Angel.

The area takes its name from the manorial lands held by Ralph de Berners in the 13th Century, consisting of hilltop fields and springs until building started in 1820s. Initially this started with terraces and then whole estates such as Cloudesley and Milner-Gibson. The well-known Barnsbury squares are individual, ranging from Barnsbury Square, with its a countrified air and individual houses and Lonsdale Square and its extraordinary Tudor-Gothic design. Barnsbury had a much-prized view north to Highgate which was lost as terraces rose up in the first half of the 19th Century.

With the extension of the railways, Barnsbury’s new population of prosperous tradesmen and minor professionals moved to newer suburbs and the area fell into decline. Since the Second World War whole streets have been demolished, many replaced with council estates and open park spaces. The 1970s and 80s witnessed an upturn in Barnsbury’s fortunes with ‘regentrification’ of the surviving, original terraces and squares.

Famous for its hilltop springs, in particular the White Conduit spring which fed Charterhouse in Clerkenwell, White Conduit was famous throughout the late 18th and early 19th centuries as one of the many tea and pleasure gardens attracting Londoners out of the City. Entertainment included balloon ascents, jugglers, tight rope walking, theatrical farces and ballet. Cricket also began to be played on White Conduit Fields in first half of the 1700s. The White Conduit [Cricket] Club was formed of aristocrats and gentry in the early 1780s and employed Thomas Lord as a bowler. The club eventually moved to ‘Lord’s’ cricket ground where it became Marylebone Cricket Club. Between 1812 and 1820 the Regent’s Canal’s famous 880-metre long Islington Tunnel was excavated under the hill from Muriel Street, west of the White Conduit, to Noel Road.

Flanked by King’s Cross to the east and Barnsbury to the west, the chalky soil of Caledonian Road gave it its first name – Chalk Road. It was privately built in 1826 to link Holloway and Battle Bridge (later King’s Cross). It cut across open fields and over the newly built Regent’s Canal. Two of the road’s earliest buildings were the Caledonian Asylum (1828), from which it was to take its name, and its neighbour Pentonville Prison (1842). The asylum no longer exists but was an orphanage founded to care for the orphans of Scottish soldiers killed in the Napoleonic Wars.

Another of the area’s well-known institutions was the Metropolitan Cattle Market (1855). This was the livestock market that replaced Smithfield. Later renamed the Caledonian Market, it also developed as a bric-a-brac market, sharing alternate days with the animals. The market ceased trading as a general market in 1939, however, its abattoirs continued to operate until the mid-1950s. Today, Caledonian Park occupies the site but the former market’s 46-metre high clock tower stands dominant in the open space.

King’s Cross Station (1852) was to have an important role in giving employment to the area, with many railway workers living on and around Caledonian Road. However, in his novel ‘Our Mutual Friend’ (1864-5) Charles Dickens describes the area around Caledonian Road as unpleasant and one that is full of noxious trades. As the road developed it attracted a mix of residential terraces and small business. Post-Second World War redevelopment witnessed some of the older buildings being replaced by council-built properties, including the Barnsbury and Bemerton estates.

Today, Caledonian Road retains a unique identity and each year the Cally Festival attracts large crowds to enjoy all that the thoroughfare and its vibrant community has to offer.