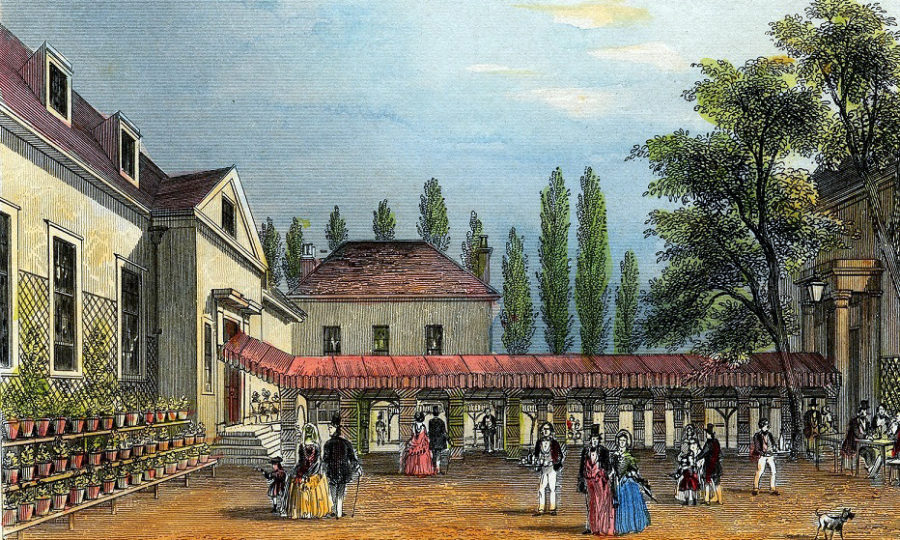 Highbury
The name Highbury signifies high fort and was the title of the 14th Century manor house built on the hill, north of the present-day Highbury Fields, possibly so-called as it could look down on the lower manor houses of Barnsbury, Canonbury and Holloway. The fine manor house built by Prior Robert Hales, Grand Prior of St John’s, Clerkenwell, Knight Hospitaller and Lord Treasurer of England, Highbury Barn Manor House was destroyed during the Peasants Revolt in 1381 by a mob led by Jack Straw and Wat Tyler; the derelict site became known as Jack Straw’s Castle. Highbury House, a Georgian mansion, was built on the site in 1781 and its raised position on the hill meant that a telescope, installed by Alexander Aubert and used from an astronomical observatory attached to the house, could see shipping on the Thames as far as Gravesend.

The area of Highbury had a tiny population in the Middle Ages and, although only 3 miles north of the City of London, it was a rural farming community until the early 1800s. The area was known for its fine milk and cream, produced by farms such as Cream Hall situated in Highbury Vale. During the 18th Century its rural character attracted Londoners to the tea room and pleasure gardens attached to Highbury Barn farm. Here, they would have enjoyed cakes dipped in cream and drank ale and beer brewed on site from a small plantation of hops at the end of the gardens. Highbury Barn developed as an entertainment venue and, by the mid-19th Century, it could hold dinners for 3,000 people, as well as provide musical entertainments, acrobatics and fireworks for its guests. However, the amusements gradually became less respectable and Highbury Barn earned a reputation for drunken and riotous orgies. It was finally refused a licence after a dancing performance particularly outraged local inhabitants in 1870.

Urban development had started in Highbury with the building of the Georgian terraces around Highbury Fields in 1774. When the neighbouring Christ Church (1848) was built, it served a small village of three terraces and about 15 mansions and villas. However, Highbury’s rural character quickly disappeared in a building boom during the 1860s and 1870s. By 1872 the increasing population could use the station, now Highbury and Islington Station, to commute into the City. The Piccadilly underground line arrived at the bottom of Highbury Hill in 1906 and the Victoria line opened in 1968. Highbury Corner roundabout was completed in 1958.

Following the demise of Highbury Barn and its pleasure gardens, Highbury residents later looked to football for their large-scale entertainment. Arsenal Football Club moved to Highbury in 1913 from Woolwich. It is the oldest club to play continuously in London and in the top flight of English football. When the club moved to the Emirates stadium in nearby Ashburton Grove in 2006, the crowd capacity increased from a little over 38,000 to 60,260, making it the third-largest football stadium in England. Arsenal’s original Highbury Stadium has been converted into flats, retaining the iconic 1930s art-deco façade of the East Stand.