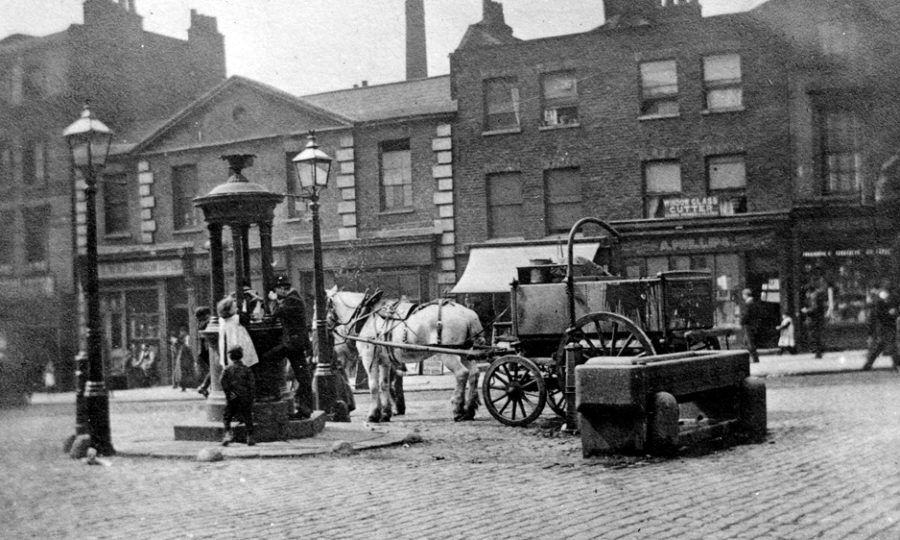 Clerkenwell
Clerkenwell is Islington’s oldest residential and business district. The area is named after the Clerks’ Well, a 12th-century water source that adjoined St Mary’s Nunnery (c1140), a religious order once located off Clerkenwell Green. Due to fresh air, a plentiful supply of fresh water, open fields and its proximity to the City, Clerkenwell was a favoured place for the building of monasteries and other institutions. These included the Priory of the Order of St John (1143), its Norman crypt and Tudor gatehouse can be visited today, and Charterhouse Monastery (1370) and (later) School.

As a parish until 1900, Clerkenwell stretched from Smithfield in the south to Chapel Market in the north; much of what may be considered Islington, such as the Angel Hotel and Inn, Pentonville Road and the market fell within Clerkenwell’s borders. Running vertically through the district is St John Street, once the main droving route from Islington and the north to the live meat market at Smithfield. ‘Smoothfield’s’ origins date back to the 10th Century and only closed for livestock trading in the mid-1800s.

The area was also home to a number of prisons. Amongst these were Clerkenwell Bridewell (1615), Coldbath Fields Prison (1794) and the House of Detention (rebuilt 1845). The last two closed in 1877, with Coldbath Fields Prison making way for Mount Pleasant Postal Sorting Office (1887) and the House of Detention which was replaced with Hugh Myddelton School (1893). In 1782 the Middlesex Sessions House, a court house on Clerkenwell Green, opened and operated until 1921; in 2016 the building is currently being converted into a hotel.

Overseen by the parish church of St James (1792), the Green was once the centre of a semi-rural village; it had lost its grass by the 18th Century. Charles Dickens’ Oliver Twist and the Artful Dodger operated on Clerkenwell Green and, throughout the 1800s, the open space was well known for its political meetings. The socialist May Day march still traditionally begins outside the Marx Memorial Library and Worker’s School (founded 1933) at 37a Clerkenwell Green.

Water has played an important role in the development of Clerkenwell. Not only did the area boast many spas, springs and wells, including the famous Sadler’s Wells where a ‘musick’ house and resort was established in 1683, but also two rivers: the Fleet and the New River. The Fleet, in part, ran to the east of the parish and into the Thames at Blackfriars; it became part of London’s sewer system during the 19th Century. Opened in 1613, the man-made New River brought fresh drinking water to the City from Hertfordshire via Islington. The New River Head reservoir near Sadler’s Wells stored the New River water, from where it was piped down to subscribers. The New River Company became land-owners in Clerkenwell and developed much of their land from the late-1700s onwards for residential use. Also at this time Henry Penton MP developed his estate in the north of the parish, becoming Pentonville. Famously, Farringdon Street in Clerkenwell was the terminus for the World’s first public underground railway in 1863.

In 1900 the parish of Clerkenwell joined with its eastern neighbours, the parish of St Luke Old Street, to form the Metropolitan Borough of Finsbury following a reorganisation to London’s administration. Finsbury was later absorbed into an enlarged Borough of Islington in another restructuring of local authorities in 1965. Finsbury’s population in 1901 was over 110,000, including part of London’s Italian quarter or ‘Little Italy’. Local trades included brewing, gin distilling, printing, clock and watch making and type founding.