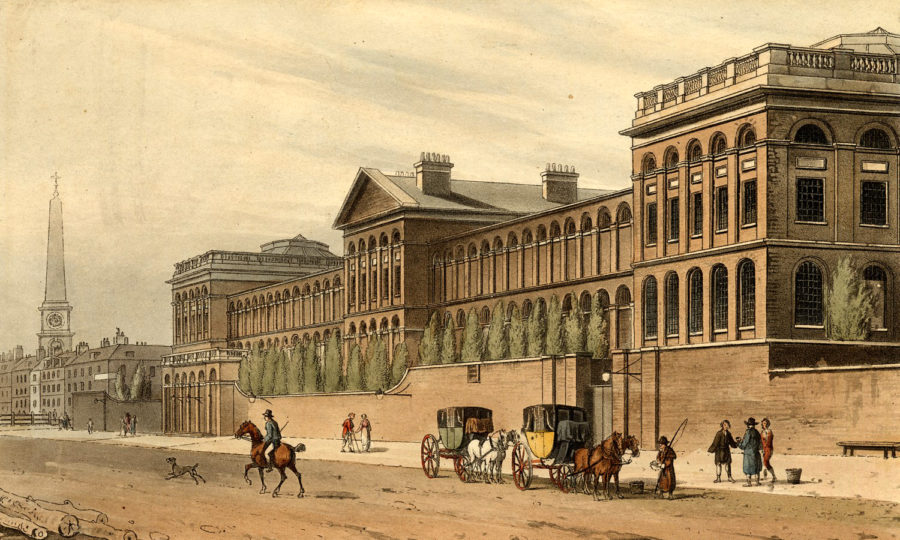 This south-east area of Islington was once part of the Great Fen, a wetland caused by an obstruction in the River Walbrook. It was later renamed Finsbury Fields after the Fiennes family, whose manor house was located in the area. The fen was drained in 1527.

The district soon became known for its archery fields and, by 1594, there were over 150 archery targets scattered across Finsbury Fields. In 1658 Finsbury became permanent home to the Honourary Artillery Company (HAC), which is still based on City Road. Its ground became well known in its own right: during the early 18th Century London’s earliest cricket matches were played there and, in 1784, the grounds witnessed England’s first hydrogen balloon flight.

Shortly after the arrival of the HAC, adjacent Bunhill Fields burial ground was established, its name taken from ‘Bone Hill’. Covering nearly 10 acres, the unconsecrated burial ground became a cemetery for religious non-conformists and dissenters. It became the final resting place of such notables as John Bunyan (1668), author of ‘Pilgrim’s Progress’, George Fox (1691), founder of the Religious Society of Friends or Quakers, Daniel Defoe (1731), author of ‘Robinson Crusoe’ and William Blake (1827), painter, poet and mystic. The last burial occurred in 1854, after around 120,000 burials had taken place.

Meanwhile, development of the district dramatically increased throughout the 18th Century. The church of St Luke in Old Street was completed in 1733. Designed by John James and Nicholas Hawksmoor, its obelisk spire became a well-known landmark. In 1749 Samuel Whitbread moved his brewing operations to Chiswell Street, establishing the first purpose-built mass-production brewery in Britain. The final pint of beer was produced there in 1976. With Finsbury Square at its centre, and laid out in 1777-91, the Finsbury Estate became a residential suburb. It is believed that the square was the first public place where gas lighting was permanently installed.

In 1778 founding member of Methodism, preacher John Wesley (1709-91) built a new chapel and adjoining house in City Road, which are now open to the public as a museum. St Luke’s Hospital for Lunatics was established on Old Street in 1786-87. The building had a magnificent frontage of clamp brick, 500 feet (150 m) long. Closing in 1916, it was acquired by the Bank of England as a printing works for producing bank notes. The former hospital was demolished in the 1960s.

Bunhill and St Luke’s was also home to London’s first public open air swimming pool, the Peerless Pool. Opened in 1806, it was located behind where Moorfields Eye Hospital is today. It featured a bath of Olympic dimensions, shaded by trees. It survived until 1850. Blocks of council flats now occupy the location but the pool is remembered in the name Peerless Street.

Anticipating the increase in population, terraces of Victorian housing were built in back streets off the main thoroughfares, with Finsbury’s population peaking in the 1860s with 108,000 inhabitants. Other significant buildings in the area include Moorfield’s Eye Hospital (1899), the Leysian Mission, City Road (1904) and Ironmonger Row Baths (1931).

In 1900 the parish of St Luke Old Street Clerkenwell joined with its western neighbours, the parish of Clerkenwell to form the Metropolitan Borough of Finsbury following a reorganisation to London’s administration. Finsbury was later absorbed into an enlarged Borough of Islington in another restructuring of local authorities in 1965.