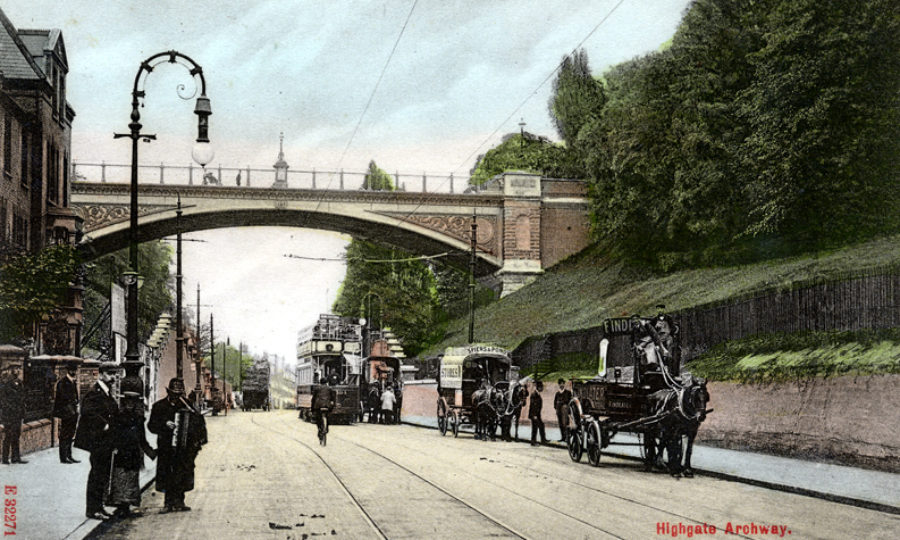 Archway takes its name from the Highgate Archway, a John Nash-designed viaduct to carry Hornsey Lane over a cutting through a hill linking Holloway Road with the Great North Road, and bypassing Highgate Hill. Archway Road, a toll road, and the viaduct opened in 1813. The viaduct was replaced in 1897 by a cast iron-arch designed by Sir Alexander Binnie, which still stands today. Archway Road was widened during the 1960s. Other notable features of the Archway area include the Whittington Hospital, named after Lord Mayor Richard Whittington and originally built as the Holborn Union Infirmary 1877-79, Archway Underground Station opened in 1907 as Highgate Station and the 59 metre-high Archway Tower completed in 1963.

Highgate Hill, the road from Archway to Highgate village, was the route of the first motorised cable car in Europe operating between 1884 and 1909. It was at Archway that Dick Whittington heard the Bow Bells ringing and returned to London; a memorial stone named the Whittington Stone is also located on Highgate Hill. The Archway Tavern, where Highgate Hill and Archway Road meet, is where the photograph for the cover of The Kinks’ 1971 album ‘Muswell Hillbillies’ was taken.

In 1753 the area and manor became the property of William Tufnell, after whom the area was named; his manor (now demolished) stood on the site of the Holloway Odeon (1938).

Tufnell Park was still rural into the 19th century and retained its important role as a base for a number of dairies supplying the capital. During the mid-part of the century, Henry Tufnell, a descendent of William Tufnell, proposed a scheme for building development. The initial work was largely limited to the area around Carleton Road. In 1865 the scheme was taken up by George Truefitt, who developed most of the local villas and St. George’s Church (1865). Housing was of a robust nature and Tufnell Park kept its good name until the end of the century. Its residents were a mix of middle class professionals and retired merchants.

The shabby genteel reputation of Tufnell Park made it a standard comic reference in the nineteenth and twentieth centuries. George and Weedon Grossmith locate their aspirational Mr Pooter around Tufnell Park (Upper Holloway) in Diary of a Nobody (1888-89). Julian and Sandy in the Round the Horne (1965-68) radio series often referenced Tufnell Park.